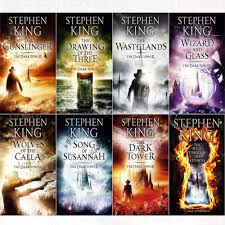 Stephen King’s books were like a gateway drug for me. Introducing me to a world of reading that I hadn’t explored before I discovered his novels. While his books often get labeled horror or suspense, he has written many that do not fit those categories. King’s great & gripping novels create and explore fascinating worlds, some of which contain horror and suspense, but are imaginative beyond the scare.

This process was actually much more difficult than I could have imagined, but these are, for me, the ten best Stephen King books. King has a substantial body of work (somewhere around 70 books). Getting into his books can be overwhelming, and many readers start by choosing books that got adapted into movies, so they have a sense of if they will like it or not. However, some of his best novels have made poor film adaptations. A lousy film shouldn’t scare a reader away from his novels, which might take a very different turn.

I’ve added one other partial review by an Amazon verified buyer. I don’t trust critics because I believe many get paid to say what the publisher wants them to say. That may not be true, but it’s my opinion. One thing to bear in mind is that a lot of readers now criticize King’s book because his political stance doesn’t align with theirs, so take it with a grain of salt.

Starting with King’s first book is as good a place as any. This is a book that touches on religious fervor, teenage acceptance, and handling embarrassment. In Carrie, King takes a hard but intriguing look into the world of a teenage girl who suddenly obtains the power to destroy with her mind.

Nine hundred and seventy-two (972) verified Amazon buyers gave Carrie 4.5 out of 5 stars, 86 percent gave it either four or five stars.

“Still stands up well today. I hadn’t read this book in more than twenty-five years, but I’ve seen the movie countless times since, so I had to pick up the novel and read it again after all these years. I had forgotten that King’s Carrie was NOT Sissy Spacek, and his Margaret White was by no means a Piper Laurie.” – Trent St. Germain verified Amazon purchaser December 30, 2016

Another quirky story set in Castle Rock. This one, however, will not give you nightmares and chills or have you seeing clowns in every drainage ditch. It might, however, make you fear to step on the bathroom scale. But, not because of gaining weight but rather from losing it. Scott Carey is losing weight without getting thinner.

One thousand, three hundred, and thirteen (1,313) verified Amazon buyers gave Elevation 3.8 out of 5 stars, 62 percent gave it either four or five stars.

“Lately, it seems, Amazon Customer Reviews have been experiencing a spike in reviews that are not, in the traditional sense, reviews at all. Some are Stephen King haters complaining about the price being charged for King, and other writers. Other false reviews are posted to register their umbrage at King due to his left-leaning political views.” – Andy Anderson Hall of Fame Top 10 Reviewer verified Amazon purchaser August 27, 2013

Not yet available in paperback!
Buy the Hardcover $13.97:

#8 Great & Gripping Novel – Mr. Mercedes:
This is actually a trilogy with Finders Keeper and End of Watch, which is now a TV Series. Bill Hodges a retired police officer, Jerome (Bill’s neighborhood high school handyman/boy), and Holly try to stop Brady Hartsfield (whom they don’t know by that name yet). Mr. Mercedes stole a Mercedes and drove it into a crowd of people waiting for the job fair to open in the early morning hours, killing and maiming some even in sleeping bags. But, Mr. Mercedes has an even more diabolical plan for public notoriety, and this unlikely trio must stop him.

What could be more horrifying than a trusted member of the community, someone very close to your children, a Little League coach and teacher accused of defiling an eleven-year-old boy and leaving his corpse in the park? When detectives and the DA find witnesses, fingerprints, and DNA that point to the teacher and coach who has an ironclad alibi, how can both be right? A compelling yet unsettling story of unbearable suspense unfolds. You will want to keep turning pages until the shocking truth gets revealed.

Three thousand, seven hundred, and thirty-three (3,733) verified Amazon buyers gave The Outsider 4.4 out of 5 stars, 81 percent gave it either four or five stars.

“This is more in the Mr. Mercedes universe than the old Derry/Castle Rock/Things that go bump in the night universe of old. It starts out being a perplexing murder mystery, and it’s not until later in the story that supernatural elements start creeping in. By that time, though, you’re so involved in the story that the supernatural elements seem plausible…” – Lisa Ann verified Amazon purchaser May 23, 2018

A haunted hotel (The Overlook) and an alcoholic caretaker are slowly being taken over in a remote Colorado locale. Stephen King reels you into the trap and slams the door. Few novels are as scary as The Shining.

Four thousand, four hundred, and thirty-five (4,435) verified Amazon buyers gave The Shining 4.7 out of 5 stars, 93 percent gave it either four or five stars.

“Prepare for the darkest form of horror. I can’t with good conscience recommend anyone to read this book. It gave me nightmares every night that I read it. I woke up thinking about it and couldn’t get it out of my head. I’m reading something else as fast as I can…can’t wait to get back to the basic SK. Nothing else holds a candle to this.” – Matthew Ellis verified Amazon purchaser October 28, 2016

Set in post-apocalyptic America. In a world depopulated by a government-created virus. The Stand explores these survivors’ fight between good and evil. It fleshes out in competing communities with the good residing in Boulder, Colorado and the bad in Las Vegas. A classic and compelling King novel that is long but a great read. You will either love this book or hate it, but you shouldn’t ignore it!

Three thousand, three hundred, and thirty-three (3,533) verified Amazon buyers gave The Stand 4.6 out of 5 stars, 88 percent gave it either four or five stars.

“I have always loved this book and the uncut version is by far the best.” – Obsessive Cat Disorder Top Contributor verified Amazon purchaser August 24, 2016

Clowns enter into this story with a significant scare factor. Pennywise, the Clown, is an incredibly scary character who haunts the childhood of the children of Derry, Maine and then returns in a 30-year cycle to haunt them as adults. A tale more about the bonding of children and overcoming adversity than a true monster tale. This book does contain both elements and is an incredible read. If you spend the rest of your life a little nervous around clowns – we understand completely!

Four thousand and ninety-six (4,096) verified Amazon buyers gave It 4.5 out of 5 stars, 87 percent gave it either four or five stars.

“There’s an evil lurking in Derry, Maine. It lurks in the storm drains and the sewers. The scary part? The entire town is affected by evil that lives under the city wreaking its havoc upon the town, but only the children can see It.” – Danielle verified Amazon purchaser May 1, 2017

The Complete Serial Novel: A non-horror story set in Cold Mountain Penitentiary in a depression era America, which follows a prison guard as he oversees a prisoner with the ability to heal. Touching and compelling as a book, a great read, and one of the best film adaptations of a Stephen King book ever.

One thousand and two hundred (1,200) verified Amazon buyers gave The Green Mile 4.8 out of 5 stars, 96 percent gave it either four or five stars.

“If you’ve seen the award-winning movie with Tom Hanks, then, by and large, you know exactly what to expect from this book. That’s not to say you shouldn’t read this book for fear it will be redundant. In fact, I would almost advise you to watch the movie first, then read the book.” – AustinTiffany verified Amazon purchaser August 27, 2013

A fantastic story based around a man’s discovery of a portal that can transport him back to the same day in 1958. Everything he does back then affects the future world and changes if he goes back again. “In an Open Letter from Stephen King” he relates, “I’d like to tell a time-travel story where this guy finds a diner that connects to 1958… you always go back to the same day. So, one day he goes back and just stays. Leaves his 2007 life behind. His goal? To get up to November 22, 1963 and stop Lee Harvey Oswald.” Well, that was 2007, he finally published it in 2011. The story is a “real page-turner” to use someone’s cliché, but it is. It’s another of his stories where he pulls you in, and you don’t mind. In fact, you’d be OK just staying there as Jake does. This is not a horror story; it is historical fiction with plenty of real-life facts about those times in the early ‘60s.

“Some books I rate with 5 stars just because of my pleasure in the story. These aren’t always well-written or creative, or something someone else would like. Then there are those books that are so well-crafted, not just with character development or storytelling but in the writing itself. This is one of those books.” – Tanya Oemig verified Amazon purchaser July 10, 2017

Not one novel but a serious of books, the Dark Tower transforms the reader into the worlds of Roland that has “moved on” from civilization. The series starts with Roland chasing Walter, a character from his youth. It then picks up steam as he draws several characters from other dimensions into Mid-World including Jake, Eddie, and Susannah. They set off on a quest for the Dark Tower. A story that connects many of the books in King’s universe, the Dark Tower is King’s opus, his LOTR if you will. Well worth reading even if you are just getting into Stephen King. You will say “Thankee sai” later!

King says about the Dark Tower, “I have written enough novels and short stories to fill a solar system of the imagination, but Roland’s story is my Jupiter—a planet that dwarfs all the others…”

Two thousand, eight hundred, and sixty-eight (2,868) verified Amazon buyers gave The Gunslinger 4.0 out of 5 stars, 73 percent gave it either four or five stars.

“Fascinating book starts King’s Epic Series – The Gunslinger, the first in the series, opens, appropriately enough, with “the gunslinger” chasing an unidentified man across a nameless desert: ‘The man in black fled across the desert, and the gunslinger followed.’” – Frank Watson verified Amazon purchaser August 27, 2013

Stephen King has created some incredibly interesting novels that traverse more than just one genre. If you haven’t read King, choose one of these eight books, and start on a fantastic journey. Get the insight into a profound and influential writer who creates incredible worlds for you to explore.