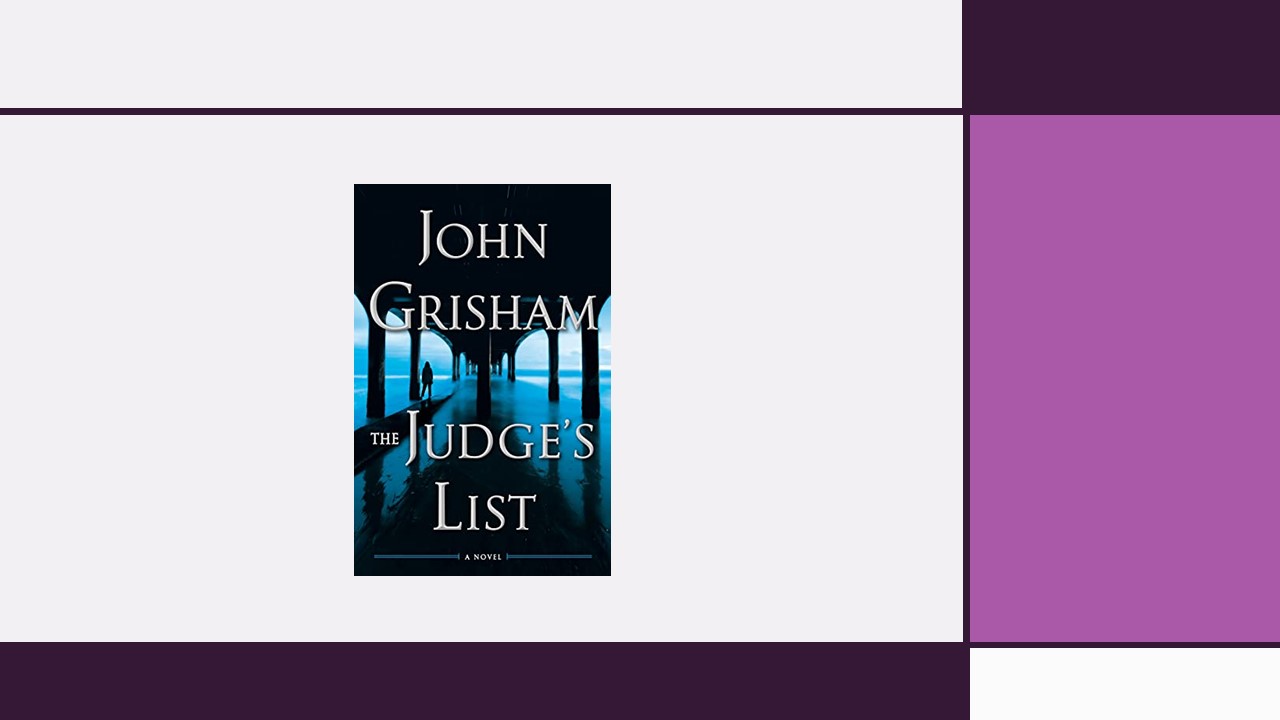 John Grisham has done it again. Grisham has hit another home run with his 2021 book, The Judge’s List, The Whistler’s sequel, an epic legal thriller.

An Introduction to This Epic Legal Thriller

Already among the most well-known American authors of intensely compelling stories full of excitement and satisfying conclusions, Grisham gives us The Judge’s List. This epic legal thriller is certainly worth a read for fans of his work – and a good entry point for anyone interested in giving him a try.

Have you ever read a book that you just couldn’t put down? Then there’s a very good chance that you’ve read one of John Grisham’s mysteries or legal thrillers. Those who are familiar with Grisham’s outstanding prose and highly original story content already knew what they were getting into with The Judge’s List.

If you enjoyed The Whistler, you’re going to love this sequel, John Grisham’s latest entry to his already impressive collection of epic legal thrillers and suspense novels.

As is the case in the preceding entry in this series, this story is told in the third person point of view, meaning Grisham serves as our narrator throughout the book. Lacy Stoltz is still the main character, but you’ll still get Grisham’s distinct voice to carry you through each page.

The Judge’s List takes place in Florida, where Lacy is in a rut at her Florida Board on Judicial Conduct job – until she meets a woman, whose father was murdered, and she suspects a judge within Lacy’s jurisdiction.

The Theme of This Epic Legal Thriller

Arguably, one might say that the theme of this book is the importance of pursuing justice no matter the dangers or the likelihood that you’ll succeed. Throughout this book, Lacy Stoltz deals with one difficult situation after another, and the prospects of nailing down the crooked judge become dimmer and dimmer.

What makes these murders so complex is that the killer commits the crimes in different states and municipalities years apart, and leaves no forensic evidence other than his signature MO. Still, she perseveres and fights for the truth to come out in any way she can.

The Judge’s List is another in a long line of Grisham’s epic legal thrillers and suspenseful thrillers. John Grisham is known for and clearly highly proficient at creating courtroom and legal thrillers. You’ll get all the chills and addictive storylines that you can expect from other entries in this genre.

This is yet another novel by the tireless John Grisham. Compared to one of his literary hits like The Firm, this new book absolutely holds up. It also serves as a compelling continuation of the chain of events started in The Whistler.

Our protagonist, Lacy Stoltz, meets Jeri Crosby, whose father had been killed two decades before. That murder case and several others with the same modus operandi (MO) are still unsolved after nearly 20 years in the case of Crosby’s father. There is one person whom Jeri suspects, a sitting judge who she’s been stalking obsessively since her father’s death.

With no shortage of other victims to be found along the way in her 20 years of pursuit, the stakes could not be higher. And yet, the trail couldn’t seem colder as everyone is seemingly a suspect and suspicions run wild, but it’s nearly impossible to find a single scrap of proof that could identify and condemn her father’s murder in this epic legal thriller.

Is Lacy Stoltz up for the case?

My Opinion about This Epic Legal Thriller & Read Recommendation

As usual, John Grisham delivers famously on his captivating story mechanism and ingenious plot architecture. In his work, you see a clear snapshot of real people engaging with real situations. He’s clearly still up for new challenges in his writing – definitely an author to continue to keep your eye on.

“Investigator Lacy Stoltz follows the trail of a serial killer and closes in on a shocking suspect—a sitting judge—in ‘one of the best crime reads of the year.… Bristling with high-tech detail and shivering with suspense…. Worth staying up all night to finish.’ ” — The Wall Street Journal.

With 22,015 ratings by verified Amazon buyers, this epic legal thriller was rated 4.5 out of 5 stars overall. Eighty-eight percent rated it four or five stars.

Buy the Book on Kindle