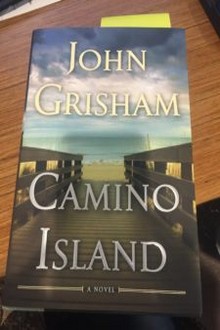 Review Camino Island, a novel about the theft of five original, hand-written F. Scott Fitzgerald manuscripts from Princeton’s Firestone Library by five cunning yet nerdy guys, well except the one psychopath, which goes south rather quickly after the heist, when the FBI discovers a small drop of blood left by one of the thieves.
There are rumors that Bruce Cable, a Camino Island bookstore owner bought the manuscripts. Elaine, an investigator for a mysterious and covert company hired by an insurance company that holds a policy on the manuscripts for $25 million, hires Mercer Mann. Mercer is a down-on-her-luck writer, who has just lost her teaching job. Elaine wants her to get close to Bruce and his wife, Noelle Bonnet, an antique dealer, to possibly discover if they have the manuscripts.

Summary of Camino Island a Novel

My review Camino Island. Mercer is the “perfect” woman for the job as she is young and beautiful, newly unemployed and up to her eyeballs in student debt, which Elaine offers to pay off for her, plus $100,000 for a six-month assignment, during which time she can finish the novel she hasn’t even started writing yet and is 3 years overdue. She’ll get half up front and the other half at completion. Another component that makes her ideal for the situation is that she spent nearly every summer with her grandmother, Tessa on Camino Island. Though she hasn’t been back since her grandmother’s passing, the beach cottage is still in the family and available for use.
Mercer fits right in with the crowd of Bruce’s friends on the island, mostly writers with storied pasts and stories about each other, as writers are notorious gossips. At least, they are in this story. Her plan to spend the six months writing her passed due novel does not necessarily go as planned. However, the discussion she has with Bruce about writing turns into a story that draws them closer together. One of Bruce’s past girlfriends was writing a story about a love triangle between F. Scott Fitzgerald, his wife Zelda, and Ernest Hemingway before his ex-girlfriend committed suicide and he begins giving Mercer the details.
While Noelle is in France buying antiques, they have a romantic fling. Despite Bruce and Noelle’s open marriage, Mercer feels a bit guilty about it, but not enough to stop.

The narrator is the storyteller, the bard, or Mr. Grisham, whichever you please.

The first set for this novel is the Firestone Library at Princeton, then the cabin in the Poconos where the thieves hide out for a while, but the setting for most of the story is modern day Florida, Camino Island, in the small, sleepy tourist town of Santa Rosa.

To me, the overall theme of this novel is not to let greed rule your life. The thieves wind up dead, in jail, or on the run because of greed. Mercer sells her moral standing to discover if Bruce has the manuscripts, mainly because she has no job, no money, and a ton of student debt. Elaine’s company and the insurance company do not want to pay the $25 million they insured the books for, and Bruce gives up a cushy, comfortable, and prosperous life on a resort island and possibly risks everything for the excitement of dealing in stolen goods.

This is a crime fiction dealing with rare books and manuscripts.

As all Grisham fans know, he is a notable trial defense and courtroom drama writer with very few exceptions. From his very first novel, A Time to Kill to The Rooster Bar, and some very popular titles in between, such as The Frim, Sycamore Row (the sequel to A Time to Kill), and The Pelican Brief most are courtroom dramas. Many of these titles became major motion pictures. Even his Young Adult (YA) series of Theodore Boone books were courtroom drama based. And yes, he did stray from the genre with Playing for Pizza, Calico Joe, The Tumor, and a few others, but crime drama or legal thriller, at least to me, is his forte! After all, he was an attorney.
Well, this is not the usual John Grisham courtroom drama, but you could refer to it as a legal thriller because much of the storyline deals with criminal elements within the underground rare books and art trade.

My favorite character was Bruce Cable. I can’t imagine having a better life than as the owner of a successful bookstore and coffee where you are the barrister. I mean come on, you can wear any outfit you want, even with a bowtie if you’re into such things, and no one thinks you’re weird because, hey you own a bookstore. You go to “work,” make some coffee, grab whatever book you choose from the shelf, and sit down and read until someone comes in. You have a huge collection of first edition books autographed by the authors, most of whom you know personally; and then, you meet and marry a beautiful and beguiling antique dealer, who fills your home with Provençal furnishing. I couldn’t imagine wanting much more, but then there are the nefarious deals with rare books to keep things exciting.
To me, this was a good story, not a great John Grisham page-turner novel like many of his legal thrillers, but it is superb crime fiction. If you’re looking for a compelling story that forces you to turn the page in anticipation, this is not it. Although, I do believe it is a must-read for all Grisham fans, and it didn’t become a New York Times Bestseller and reach number one just because it was Grisham who wrote it; still and all, I’m sure that helped. Plus, his going on tour for the first time in twenty-five years to publicize the book probably helped as well.
I think non-Grisham fans would probably like this book even more than his regulars because it is such a departure from courtroom dramas and legal thrillers. Someone that is not expecting a cutting-edge courtroom battle would perhaps be more in tuned to the book. Nevertheless, I do think anyone would enjoy the story. Well, that’s my review Camino Island!