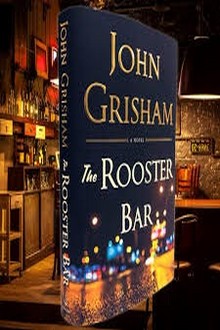 This is my Rooster Bar Book Review.

Rooster Bar Book Review… As a John Grisham fan, I was eager to read his newest crime action drama, The Rooster Bar. Grisham’s readers often expect a fast-paced story with vivid characters and a plot filled with thrilling twists and turns, and this book does not disappoint. The Rooster Bar is a sharp criticism of today’s educational, financial, and immigration systems. Grisham savages the shady colleges and universities which are far more interested in creating large profits than in enriching the lives of their students. The book also exposes corruption in the student loan industry and the excesses of Immigration and Customs Enforcement (ICE).

This crime action drama follows three students at the fictional Foggy Bottom Law School: Mark, Todd, and Zola. They all borrowed heavily (each nearly $200,000) to attend school, and they are struggling in their personal and professional lives. All of them were betting heavily on their earnings as lawyers to pay back their high-interest loans. The schools recruiting videos and TV ads sold them on how easy it was to borrow the money and get a high-paying job in a law firm.
As they progress through law school, they become aware that their school has a low percentage of graduates that pass the bar exam and only a few of those that do get well-paying jobs. They find out that even that was an elaborate hoax, as the mega-millionaire also controlled eight law firms where they would hire a few of the graduates and start them at a high salary, use them in their recruiting ads, and then lower their salaries at annual reviews.

Gordy, a friend of the three main characters and romantically linked to Zola, traces a conspiracy linking Foggy Bottom to a lender in the student loan industry. His suicide leads the three friends to investigate further. The three decide that exposing corruption is more important than receiving tainted law school degrees. They drop out of law school, assume new identities, and set up a fake and unlicensed law firm of their own with the goal of taking down Foggy Bottom and its financial partners.

The plot builds in excitement until this crime action drama provides a thrilling climax. Grisham’s reuse of a plot device from The Firm was one of my few real problems with this book, though some avid Grisham fans could rationalize it as an update to an ongoing problem, which in a way it is.

Grisham manages to make us sympathetic to these underdogs even though their methods are almost as shady as those of the law school they are trying to expose. I especially enjoyed the development of Zola’s character. Born to undocumented parents from Senegal, she becomes heavily involved in the politics of immigration after the deportation of her family members. Zola’s family’s experiences with the immigration system lend urgency to her character.
Other reviewers have criticized Grisham’s last few books for having lost the spark and thrill of his earlier works, but I found that The Rooster Bar was a return to his usual form. The characters came to life for me and were the best part of this crime action drama. Despite the slightly predictable plot twist, this courtroom drama was as engaging as any Grisham novel.
Grisham’s new book The Rooster Bar will not disappoint fans of crime action drama. Although those who have read The Firm might be turned off by the reuse of an older plot device, it’s a small point and after you get into the story, it won’t matter that much. The characters of Mark, Todd, and Zola carry the book and cause the readers to root for them even though they operate outside the law. Well, that’s my Rooster Bar Book Review. If you’re looking for an entertaining legal read, pick up The Rooster Bar and decide for yourself.

Buy it on Kindle: