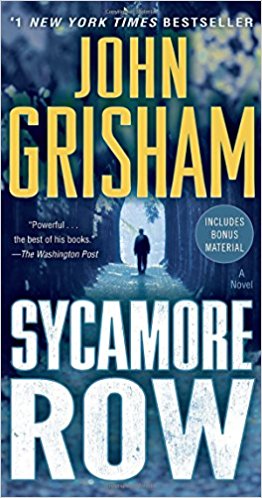 25 real-world years after John Grisham’s first novel. Grisham takes us back to Clanton in Ford County, Mississippi. Three book years after Jake Brigance successfully defended a black man accused of murdering the three white men that raped and killed his daughter in A Time to Kill, Grisham re-introduces us to Jake, Judge Attlee, and the racial tensions that abound in this small southern town.

The Tribulations of Sycamore Row

Sycamore Row gets its name from a stand of sycamore trees, one of which was used by Seth Hubbard, a millionaire suffering from late stage lung cancer, hanging himself from a sycamore tree. The day prior, he made a new will. A hand-written will leaving the majority of his estate to his maid, Lettie Lang, who nursed him through his final days on earth. He also left 5 percent to his church and 5 percent to his brother whom he hadn’t seen in years and wasn’t sure was still alive. This hand-written will would over-ride the will he had drawn up by a law firm two years earlier. What makes this story interesting is that the new will was legal in Mississippi. Probate law requires he had the mental capacity to write it and there was no undue tampering from anyone named in the will. Seth hated lawyers and had a healthy distrust for all but Jake Brigance, whom he wrote to requesting that he protect his new will at all costs.

Since, Seth Hubbard was worth somewhere in the neighborhood of 24 million dollars, everybody wanted a piece of his estate. In the first will, Seth’s children, Herschel and Ramona were named as the primary recipients of his estate. Herschel and Ramona were deadbeats according to their father that rarely came to see him, unless they needed something. So, they of course hired lawyers to protect their interest. Their primary purpose was to raise a bit of doubt in the jury’s mind. Both, to the mental capacity of Hubbard and the relationship between he and Lettie.

Lettie, whose husband cared more for drinking than he did working, had a son in prison, and a daughter recently returned from the military. Lettie’s supposed friends and relatives came out of the woodwork to help her stake her claim to the money, hoping she would reward them monetarily after she received her reward.

Grisham takes us through the boring and mundane process of establishing the estates worth, jury selection, and trial procedures. After all, not everything about a trial is filled with action and adventure. But, the events outside the courtroom, such as Lettie’s husband arrest for driving under the influence and vehicular homicide, Lucien’s search for Seth’s brother, a merchant marine with drug and alcohol abuse problems, the search for Lettie’s real parents, since she is an orphan, and the racially charged events in the town where the trial takes place are what really keeps the story moving.

Grisham is a master story teller that knows his way around a courtroom. He has proven that time and time again in his other books, but in Sycamore Row as in A Time to Kill he showed us his ability to pull us into the small town of Clanton that is the Deep South and hold us spellbound until the final verdict.