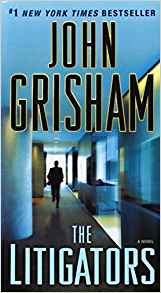 The Litigators, John Grisham’s 25th novel, is a book you either love or hate. Personally, I thought it was not a great book but has the potential to be a good movie. The reason I say that you will either love it or hate it is because it is so different than what we are used to from John Grisham. I have read everything he has written including, Playing for Pizza, A Painted House, Bleachers, and Calico Joe, which a lot of people didn’t like because they were about sports or just not his usual fanfare about lawyers and trials. However, this book was about lawyers and trials, but still not his usual fanfare in that he used a lot of humor and it wasn’t based in the south, but in Chicago. Worst yet is that the plot is very narrow and predictable.

The Litigators, Finley and Figg

The Litigators begins with an introduction of the partners at Finley & Figg, the only two in the partnership. Oscar Finley is a 62-year-old lawyer, who is not very happy with life or his wife. He won the building that houses the partnership in a lawsuit years before, which is good because they couldn’t afford the rent otherwise. The junior partner, as Oscar like to refer to Wally Figg, to make his life seem a little more important, is a 45-year-old recovering alcoholic, who still has big dreams of the million dollar case.

The two other occupants at Finley & Figg are Rochelle and AC. Rochelle is the receptionist, she had hired them to represent her in an accident case in which she was not at fault and they botched her case so bad she threatened to sue them for legal malpractice until they hired her. AC, or Ambulance Chaser, is a dog whose ears perk up at the sound of a siren and is a full-time resident at Finley & Figg.

Wally prints their advertisements on bingo cards. Additionally, he goes to every viewing of the recently deceased in hopes of hearing rumors of a wrongful death. He finally stumbles upon what he immediately perceives to be a big payday. He hears from the son of the deceased that his father may have died from a heart attack brought on by Krayoxx, a medication he was using to lower cholesterol. After doing some research he learns of a possible class-action lawsuit initiated by Jerry Alisandros in Florida. He thinks if they can sign up as many clients as possible, they can ride the coat-tails of the class-action suit to a big money score.

Enter David Zinc, a Harvard Law School graduate, working as a drone in International Law for a large firm. David is burnt out from working 80-hour weeks for 500 dollars an hour, most of which goes to the firm, even though he earns a very good wage. One day he just loses it and leaves. He goes to Abner’s Bar and drinks the rest of the day away. When he leaves, he sees a sign on a bus stop ad for Finley & Figg and tells the taxi driver to take him there. With no job and little hope, he begs for a job with the partners, who agree to hire him for much less than he’s worth.

Late one night, David’s wife tells him of a friend that has an immigrant housekeeper whose son is comatose, possibly from lead poisoning from a toy. David and his wife Helen befriend the parents and David winds up representing some of the immigrants in a labor dispute and he wins. However, during the dispute one of the employers tries to burn down Finley & Figg.

Unfortunately, Oscar is sleeping on the couch in the office, shoots the arsonist, and winds up getting sued for excessive force. That’s just the start of problems for Finley & Figg. The lawyers representing the pharmaceutical firm, Varrick Labs decide they have a favorable judge in Chicago and they know none of the partners at Finley & Figg have trial experience. Since there is little evidence to tie Krayoxx to the deaths, they narrowly escape a legal malpractice suit from their clients and a deformation of character suit by Varrick Labs.

Since the trial is the best part of the book I won’t be the “spoiler” for you, even though it goes as expected. David Zinc continues to dig into the lead poisoning and eventually starts his own firm.

Although some will argue that it is not Grisham’s best, it is a good read, well worth the money, and with a few adjustments could be a very good movie.

12 Replies to “The Litigators Book Review”